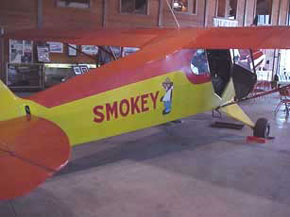 After Smokey, the bear cub, was injured in the Capitan, New Mexico forest fire, he was moved to Santa Fe, New Mexico. There, the children of Ray Bell and Homer Pickens nursed him back to health.

Young bear cubs grow rapidly, and Smokey soon become unmanageable. A decision had to be made. The Game and Fish Department of the state of New Mexico and the United States Forest Service made the decision to dedicate the bear cub to the boys and girls of America.

Bill Piper, owner of Piper Aircraft Co., sent a brand new Piper Cruiser to Santa Fe so they could fly Smokey to the National Zoo in Washington, D.C. Can you imagine trying to travel with the bear cub in an airliner?

On the eve of the flight, prominent Santa Fe artist Will Schuster hurriedly painted the Smokey Bear logo on the plane. Frank Hines, the Piper dealer in Hobbs, New Mexico, piloted the plane. Homer Pickens, Assistant Director of the New Mexico Game and Fish Department, tended to Smokey for the duration of the several days' plane trip to Washington, D.C. I really can't imagine holding a bear in my lap in the back seat of a small plane for a trip across the United States. Finally, in ceremonies at the Nation's capitol, Mr. Pickens presented Smokey to the boys and girls of America as a living symbol of forest fire prevention.

Aviation artist R.T. Foster of Oklahoma City painted the museum's 1947 Piper PA-12 Super Cruiser with the same Smokey logo that was hurriedly painted on Smokey's plane that evening in Santa Fe in 1950. As a museum aircraft, the plane is used to demonstrate how aircraft are used in agriculture, fire prevention, forestry support, and personal transportation. As a flying exhibit at regional air shows, Texas Forest Service Rangers tell the story of fire prevention. Steve Dean flew forest fire patrol in an identical PA-12 for the Texas Forest Service in 1960. The Cub is also actively earning its keep in private forest management and as a flight trainer for museum pilots

Betty Cabber, one of the Pickens' children who helped raise Smokey, may be contacted at longhorns10@msn.com. Col. Homer Pickens, Jr., U.S. Army retired, recently visited the museum and shared pictures and stories about his Dad and the cub adventure. Now on display at a museum in Illinois.

Flight of the Phoenix Aviation Museum